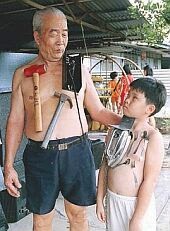 Liew discovered his talents late in life, after putting in many years of manual labor. He discovered that his metal tools began to stick to him. Scientists could figure out no reason for this to happen, as he generated no magnetic field. It was later found out that he produces high levels of friction that causes suction which makes the metal stick. Liew can stick metal objects weighing up to 2kg each and no more than 36kg total to his body. Liew's grandchildren also exhibit this ability, which proves it to be genetic. Liew was featured on the 2nd episode of Discovery Channel's One Step Beyond.